7/5/2011
Today is my first day of Go School. This is a very weird experience. I can’t understand anything that other people are saying, but somehow I feel like I have learned a lot about Go today. The Koreans are very strong and I like the general Korean style that most people play. They like thickness very much and they like to fight aggressively. It amazes me how dedicated these kids here are to Go. Every day they have formal Go study for 12 hours and then when they get back home they study until 11PM when they go to sleep. Most of the people here my age are 9-dan and are aspiring professionals. It surprises me the gap in skill between a 9-dan and an 1-dan professional. There are even some 9-dans that aren’t inseis because they are weaker than the other 9-dans. There are many 9-dans who are very strong, but only a few become professional every year. A bit of food for thought is that these kids are able to give their all just for a small chance of becoming  professional. They seem to live in a closed world of Go. If they have free time they study Go and they eat while they look at top Go player’s statistics for “fun.” I lost all my games today even though I am playing with their very young students. 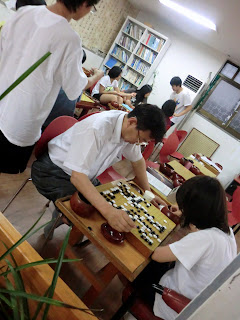 Headmaster playing a serious go game with a student.
7/6/2011
I woke up today with a terrible backache from sleeping on the floor. There are about 20 kids who are all exceptional at Go staying in the headmaster’s apartment. They are all 3-dan and higher. Though most of them are 9-dans,  the lowest ranked out of the Koreans is a little kid I think about 6 who is a solid 3-dan. I have started to specialize my study in Korean Go to hangmae, a Korean technique which means the flow of stones. I find  it to be somewhat similar to tesuji which applies many odd fighting shapes. It really helps with fighting and simplifies reading because hangmae acts as a bookmark leading to a favorable result. Today I lost all my games as well. It‘s a bit frustrating to lose all your games to little kids. 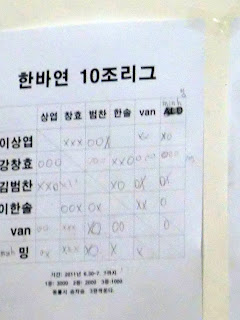 Win some, lose some!
7/8/2011
Today, I woke up got ready and went to the dojang a little early. I’ve started changing my style from the traditional peaceful play found frequently in the States to the somewhat reckless fighting style of the Koreans. I think it’s the best way to improve because it forces you to read further. I have also found that Life and Death is a huge part in Korean Go because it comes up so often in their games. Today I memorized a pro game on the recommendation of the headmaster. He says it’s not enough to go over a pro game; you have to memorize it in order to get a solid feel of the best move on intuition. I find pro games to be much more helpful now because when you memorize them you understand why professionals make each of their moves. It’s easy to gain 2 stones in strength by putting a purpose in each stone you play. Oh it’s  a good night because I won all my games today! 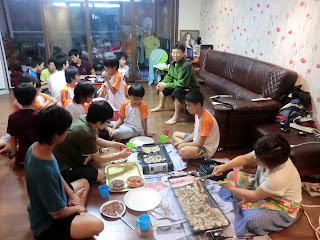 Dinner at the dormitory
7/9/2011
Today is Saturday which is kind of like a break day at the dojang. Everyone participates in a team tournament. On my team was Yu Minh and Masakito, a 7 year-old student from Japan. Both of them are 9d and aspiring professionals. I felt out of place and was given handicaps against the other players. I played a 9d insei with 6 stones and won. The next game I played with another 9d insei with 6 stones and won again. Our team won the tournament, but I knew I didn’t deserve to win because they were much stronger than me. 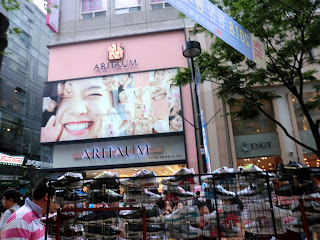 Myongi Shopping Center
7/10/2011
Sunday the dojang is closed so I went to Myongi with Om, an 18 year-old Thai player who has been there for a year. We went by subway and bus. The public transportation in Korea is quite complicated. We had to transfer subways and buses a couple of times. When we arrived at Myongi we met with Om’s friend and we visited the Inseidong, the Korean Go Club. It fascinates me that there are no weak players to be found in Korea. The Go club was filled with people 7d+ and there was a pro tournament on the third floor of the building. After visiting the Inseidong and shopping at Myongi we went to the cinema to watch Harry Potter and the Deathly Hallows Part 2. 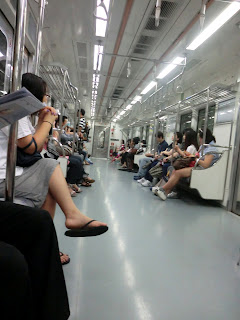 Very clean subway!
7/11/2011
Today at the dojang there was Lee Sedol who came to teach the inseis. He seemed to be very calm and modest. He went over of the inseis’ games and I was watching the review. I was shocked to see that Lee Sedol was able to play out the whole game by just seeing the board a few times as he went around the room. I got him to sign my fan during lunch. He did so with a smile and nod. Oh and on a side note I won all but one of my games against Kang Chang Hyo, the top player in the 10th division. I was put in the lowest league which has 2 dans to 4 dans, but through intense concentrated study for a week I was able to go on a winning streak and was able to end up 2nd in the league. 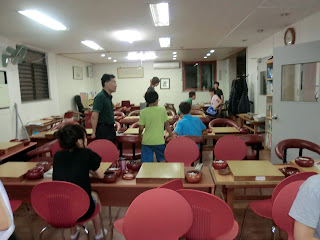 A day at the dojang
7/14/11
Today was a pretty good day. I won 2 games against people in higher leagues. One’s name was Pakchan and the other I don’t remember his name. They are significantly stronger that the people in my league. Even though I was able to beat them, the headmaster wouldn’t move me up because of my losing streak in the first two days which brought down my record. I memorized another 3 pro games today all played by Lee Sedol. I find his games a challenge to go over because he tenukis and plays aggressively all over the board. It takes a lot of thought to follow. 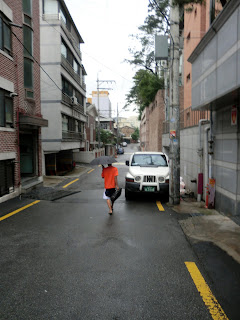 Walking to school
7/16/2011
Today is Saturday, but the dojang is not open today because there is a tournament for the inseis. So Om, Chisu Yun, Cho Sun Ah, Masakito and I went sightseeing. We visited an old Korean palace which was really interesting and then we went biking near the lake even though it was raining really hard. There was also an awesome playground over near the river where we went zip-lining. Afterwards we went to the mall to eat and we spent some time inside a Korean music store listening to K-pop albums. When we got home there was a barbecue dedicated to the kids that went to the tournament. I can’t say Korean barbecue is good, but it was a good experience to be a part of a large gathering of celebration in Korea. 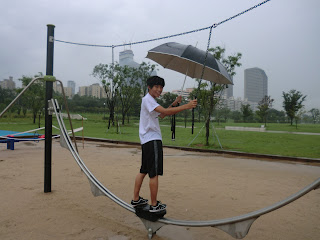 A Rainy Day at the Park
7/19/11
Today is the day I go back to America. It’s sad that I have to leave just when I had just started to settle in. Before leaving I got to say bye to the handful of kids that are there in the morning. It was sad to leave the dojang and Korea. It would’ve been nice if I had got the chance to stay a bit longer and learn more. I got a lot of Korean Go books as gifts when I left. I got a book each on hangmae, pae (ko), and life and death, and a Korean Baduk magazine (which are not really helpful because I don’t understand it). I left the dojang at 12:30PM on an airport bus heading back to the Incheon Airport reading the Baduk magazine that Mr. Oh had given me. One day I look forward to come back to the dojang where I have found many good friends and teachers. 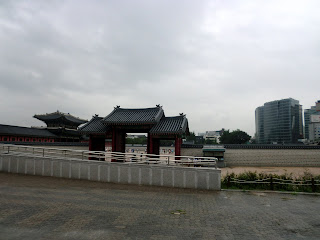